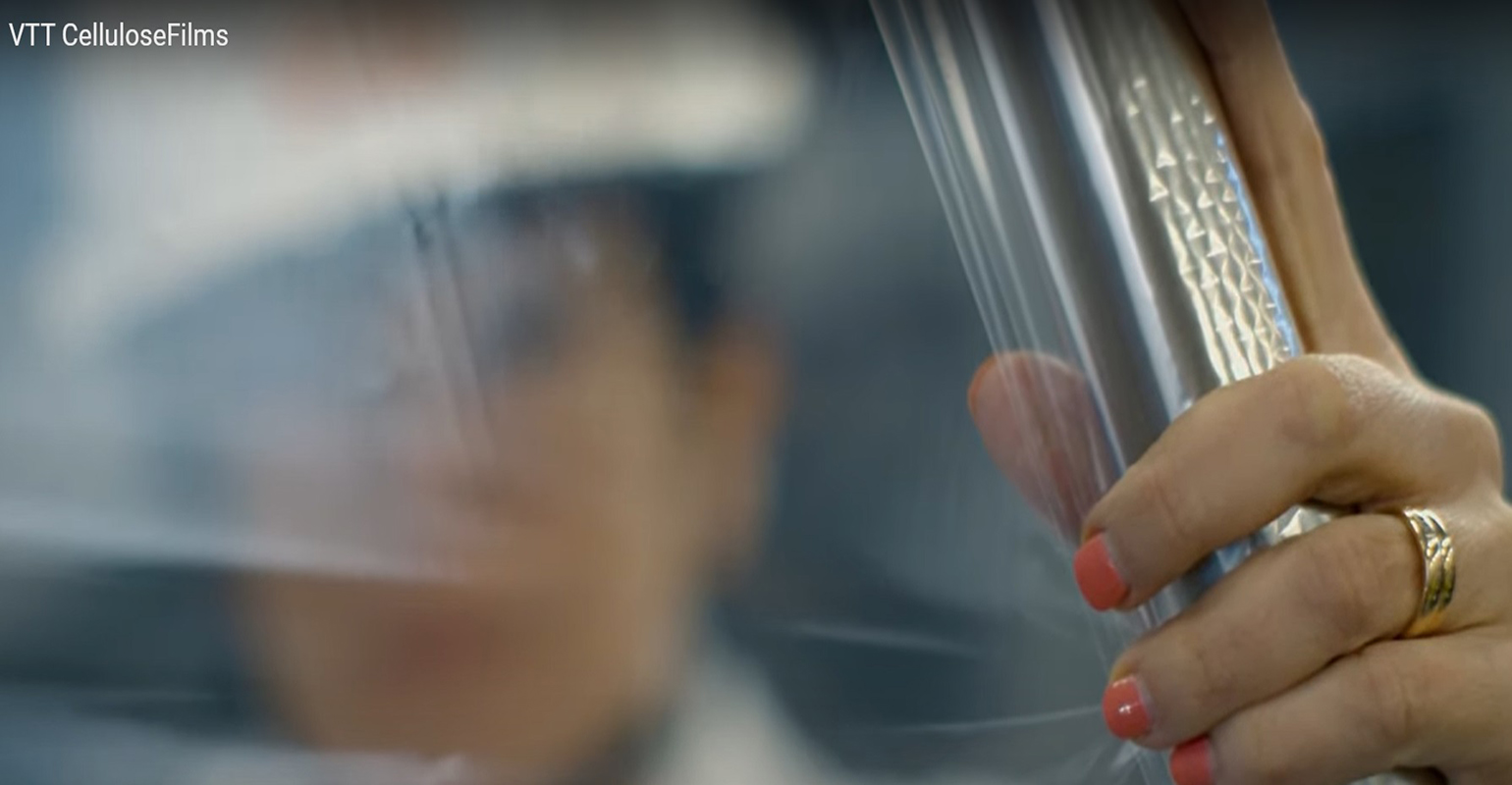 Food packaging is optimized when it protects food and minimizes waste, which has traditionally been a role played by thin plastic films. However, those materials are difficult to recycle and may end up in the wrong place after use.

VTT has developed a polymeric solution to address the problem: regenerated or recrystallized cellulose that can replace clear plastic films.

“We can produce transparent and flexible cellulose film,” says Ali Harlin, VTT research professor. “The consumer cannot distinguish between the crystal-clear material and traditional oil-based plastic. Cellulosic film can resist dampness, but in nature it disappears as completely as a sheet of paper does. The product is biobased and biodegradable.”

According to the associated video, the cellulose is sourced from side streams from pulp mills, recycled paper, and recycled clothing. It can be used as a standalone wrap or as an environmentally friendly  moisture-resistant coating for paper.

It’s claimed as better than traditional cellophane because no harmful chemicals are used in the manufacturing process.

In addition to the protective properties, plastics are important because consumers want packages that allow them to see the product itself. However, once they have been used, many packages are sources of problems including confusion.

For example, if a package uses paper and plastic, the consumer may wonder if it can be recycled with cardboard, or if the plastic needs to be torn off first. Some materials have alternating layers of fiber and plastic. Many packages are placed in mixed waste streams by people who cannot think of a better way of disposing of it. Plastic that ends up in a cardboard recycling bin can be removed, but the plastic usually ends up incinerated.

It can be recycled with corrugate packaging.

“The cellulose film developed by VTT can replace plastic as a more climate-friendly solution,” says Atte Virtanen, VP, biomaterial processing and products at VTT. “It also makes recycling easy, as it can be placed in cardboard [corrugate] recycling along with other packages.”

VTT is owned by Finland, a country that remains far short of the goals set by the EU for reducing the environmental harm caused by plastics. At present about 20% of plastics are collected, and even less ends up recycled.

Finland is currently more of a packaging material country than a printing paper country. Last year the value of sales of cardboard exceeded that of paper for the first time. The forest industry is looking for new products with a big market, which bring value-added. Flexible, transparent cellulose film is one such product. The world market for plastic films was about 110 billion dollars last year.

VTT’s unique expertise has been used in cellulose film as a replacement for plastic.

The production of packaging material is in the pilot phase, and it could be in extensive industrial use in five to seven years. The pilot line is modular and can be used to test different materials. For example, according to the video, waste streams from a food processing operation can be used to create the packaging for the food itself.