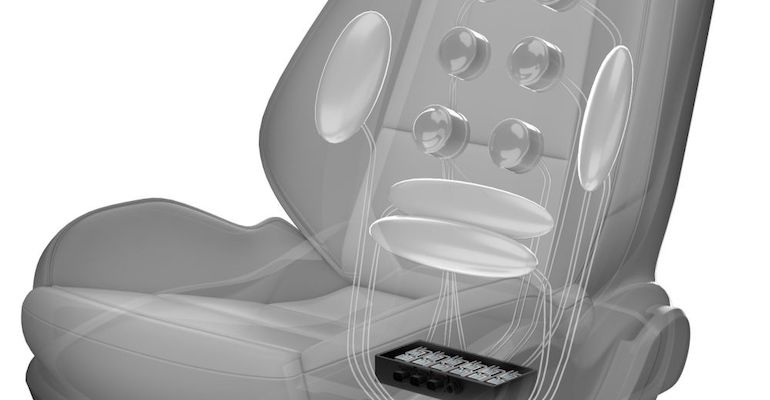 Massage seats generally require multiple mechanical components, which can add considerable weight and bulk to the seat. In turn, this can lead to a less comfortable ride for the passenger. Further, multiple mechanical components are not only costly, but also require a considerable amount of energy to operate. Heat generation and loss also is an issue, alongside the fact that the components create a constant noise when in operation. This is a disadvantage in battery electric vehicles (BEVs) and hybrids driven in electrical mode, which do not have the noise of an internal combustion engine to mask the sound.

By using electro-active polymers (EAPs) in the form of stacked actuators, however, virtually noise-free pneumatic systems can be realized. They also are more energy efficient than mechanical alternatives, having little to no impact on driving range in terms of battery autonomy. Swiss company Dätwyler, a pioneer in the field of EAPs, is promoting their adoption in car seats with a built-in massage function, among other applications.

Basically, EAPs convert electrical energy into sensitive and versatile mechanical motion through elastic deformation. Dätwyler’s patented process has enabled production of stack actuators on an industrial scale for the first time. Thanks to the unique stack design, conventional actuator technologies can be replaced by this technical solution in various applications, according to the company.

New applications in cars of the future

“Our electroactive polymers in a unique stacked design are a promising future technology that will enable completely new and diverse applications in the car of the future,” said Dätwyler CEO Dirk Lambrecht. Additional potential applications include thermal management in electric vehicle batteries (pump actuation), actuation of dashboard vents, and haptic feedback and morphing surfaces in human-machine interfaces.

Concrete haptic examples include feedback on displays and on the steering wheel, or control elements morphing out of a plain surface and becoming active when approached. Discussions with existing and potential customers, as well as initial development projects, indicate that both vehicle manufacturers themselves and suppliers of systems and interiors are very interested in the new possibilities offered by Dätwyler’s stacked electroactive polymers.

The advantages of the new technology include low energy consumption, fewer mechanical parts, low weight and volume, a robust and durable design, and noise-free operation with sensor and haptic feedback functionality. Dätwyler is currently working to build a highly automated production line at its existing Swiss plant. Lab samples are already available, and delivery of the first industrial prototypes is planned for early 2024.

Stacked actuators consist of a multitude of small capacitor cells. Each capacitor cell consists of an electrode in between dielectric barriers, which are made of a soft and flexible rubber material with high insulation properties. Once the electrodes are charged with a voltage, the electro plates start to move toward each other, creating an axial motion. In this way electrical energy is transformed directly into mechanical motion, which can be used for a range of applications, such as controlling air flow via a valve system.

In a massage seat, pneumatic systems driven by stacked actuators control air flow into and back from cushions located within the seat. These are connected via tubes with a valve system, featuring valve boxes and a pump that creates a permanent overpressure of air. The system is filled with air at a carefully calculated pressure and the valve blocks make sure each cushion is inflated or deflated at a certain frequency in order to create a massage effect. It is lightweight, non-mechanical, efficient, and noiseless.