The Awful Truth About Weld Lines

Image used by John Bozzelli in his training seminars shows a short shot with a weld line forming around a square hole. In his experience, a microscopic air gap is apt to remain between the flow fronts even after the part is fully packed. (The training tool was designed by consultant Glenn Beall to illustrate design and molding problems.)

Who knows what evil lurks within weld lines? One who does know is molding expert, trainer and technical guru John Bozzelli, a prolific contributor to this magazine. When he worked in R&D at Dow Chemical, Bozzelli had access to an electron microscopy lab. He recalls the case of an unfilled ABS computer keycap back in 1987: The weld line where three flow fronts came together was “barely visible—barely a scratch to the human eye.” Under a transmission electron microscope (TEM), the ABS flow fronts appeared as a gray “soup,” larded with darker blobs of the rubber phase; but between the flow fronts, the scan was pure white. “Nobody could believe there was nothing between the flow fronts,” Bozzelli states. That was a revelation of the true nature of weld lines.

I’ve been thinking about weld lines lately. We published in Plastics Technology a two-part series from Avient on molding long- and short-fiber reinforced thermoplastics; Part 2 comes out in March. Both parts note that fiber-reinforced plastics lose much of their robustness at weld lines, because the fibers tend to line up side by side, rather than “reach across” the point where flow fronts meet. It’s not just a problem for reinforced plastics.

Under a microscope, air gap is visible between flow fronts of a fully packed ABS part. Striations are due to incomplete color mixing. (Photo: John Bozzelli)

How common is this, really? Bozzelli answers, “As I remember, nearly all of the TEMs that I had done at Dow showed an air gap, whether the resin was filled or unfilled, unfilled being a bit worse. Since I left Dow, I try to break the part at the weld line and look at the surface of the break on both sides under a simple magnifying glass. Sometimes the areas on both sides of the weld line are glossy and cupped inward, an indication of a bubble or air. Also, often they do not match or mate, so to me that is an indication that the flow fronts were separated by an air gap. Filled or unfilled, I see this about 65% of the time. Now, I just assume it is there and do what I can to eliminate or reduce the weld line. Installing vents near the area often helps, But once you put in a vent on the parting line near the weld line, the weld line often moves and then you have to put in another vent. Vacuum on the mold does help and many times eliminates the weld line.”

What else can you do about weld lines—besides redesigning the mold or gate locations or adjust the flow pattern during fill with sequential valve gating? I recently saw a report on this issue from Moldex3D, the maker of molding simulation software. It explored the use of an overflow well (see illustration) that is designed to fill after the weld line forms, such that filling the well causes melt flow across the weld line. Simulations of glass-reinforced nylon indicated that higher mechanical properties should result from use of the overflow well, a prediction that was confirmed by lab testing of actual molded samples. 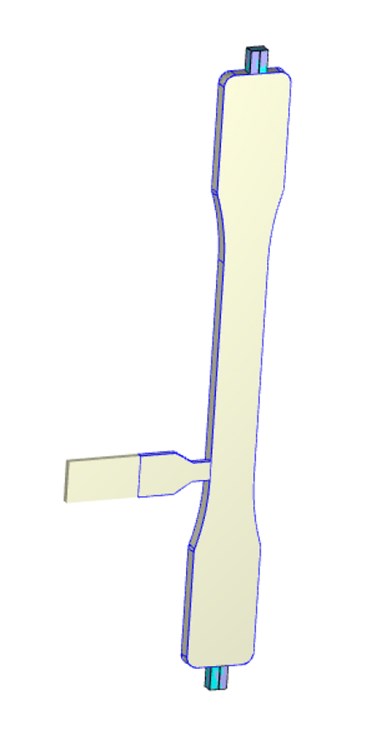 Adding an overflow well that is positioned to fill after the weld line forms can help strengthen the weld-line area by promoting flow through the weld line. Moldex3D simulated this effect on a double end-gated test bar and confirmed the effect with mechanical tests on molded parts. (Image: Moldex3D)

I asked Bozzelli what he thinks of this approach. He responds, “Adding the overflow channel to improve weld-line strength is not common, but I have seen it done a number of times. Yes, it does help, for two reasons: Often the weld line traps air and the ‘dump’ acts as a vent to allow the air to escape. That helps. Second, depending on the size of the overflow well, you get a little bit of flow melding together, and that helps strength so that you have some intertwining of the polymer chains. This is similar to putting whatever is causing the weld line, like a hole in a part, away from the end of fill. Plastic then has a chance to flow around the hole and re-meld as it continues to fill the part. That really helps to improve strength.”

If all this isn’t enough to inspire a righteous fear of the harm that weld lines can cause if placed in critical locations, Bozzelli knows of one more “evil” that lurks within those weld lines: “Take another look at the TEM photo of the ABS keycap. First is the air gap; but on one side, note the black line separating two flow fronts. That’s not supposed to be there. Yet another problem!”

Air gaps in weld lines are bad enough, but the full story is even worse.

Bozzelli explains, “It’s a huge issue in the industry that few know about. Many resin suppliers actually make thing worse by putting in too much lube, wax or flow aids. The black line of material is not ABS, but a wax, oil or other additive that phase-separated. It is much lower in molecular weight and rushes to the flow front because it is much easier flowing than the plastic and forms a barrier preventing the two flow fronts from melding together. Again, no wonder weld lines are weak—this is not a junction of plastic to plastic, but of plastic to wax. Most plastics have some additive that is low in molecular weight and has the potential to phase-separate. Make a guess how many plastics people even have a hint about this issue.”

And where would we be without the handful of uber-experienced plastics veterans who generously share their hard-earned knowledge about industry-wide problems like this?