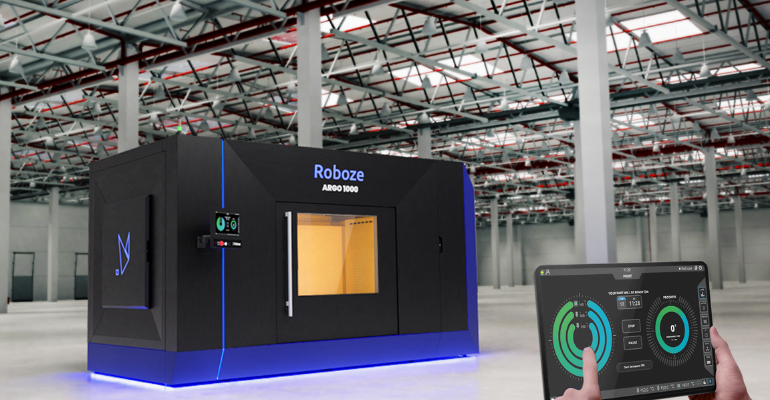 3D printing has taken on a whole new significance over the past 15 months as industries — including medtech manufacturing — struggle to manage pandemic-related supply chain disruptions. Roboze, a manufacturer of industrial 3D printing technology for extreme end-use applications, just released what it says is the world’s first 3D printer with a heated chamber designed to produce large-scale parts with super polymers and composites. The Houston, TX-based company says the Argo 1000 can offer customizable parts and on-demand production at scale.

“After years of specializing in super polymers and high-temperature composites and paving the future of industrial 3D printing, we are excited to introduce our flagship production series solution, Argo 1000,” said Alessio Lorusso, founder and CEO of Roboze. “Since we announced the opening of our new headquarters in North America earlier this year, we have grown our global customer base and invested in R&D to fulfill customer demand for a much larger 3D heated chamber super polymer printer.”

The Argo 1000 can produce parts up to one cubic meter, nearly 40 inches by 40 inches by 40 inches, radically transforming the way medtech manufacturing and other industries can fabricate lighter, higher-quality components. Using more sustainable and high-performing super polymers and composites such as PEEK, Carbon PEEK and ULTEM AM9085F, Roboze said it is reducing the current strain on global supply chains and rapidly replacing metal parts and mission-critical components for extreme applications.

Roboze was among the first companies to introduce PEEK in 3D printing. Furthermore, the company’s industrial automation system and gear-based (beltless) technology allow the production of parts that are six times more precise than those made with belt-driven printers, according to Roboze.

Unveiled on Monday, the Argo 1000 is expected to be available for commercial distribution in 2022.

“Everyone’s had a supply chain issue in the last year, it seems like,” said Joshua Niman, sales engineering lead at Formlabs, during a Virtual Engineering Days presentation. “And so, a lot of the conversation right now is, how do we bring manufacturing home? It’s great to want to improve and change your processes when things are stable. But when there are external factors causing shortages or changes in the way that you do things, especially when certain locations are blocked off to you, 3D printing takes on a whole different significance [and] becomes something that has a different level of importance in your business.”

Niman said a company might have a perfect workforce and a factory set up to go, but will run into problems if it can’t ship things there. He said he hears companies saying they need to stay on schedule, doing things at a regular cadence, and sometimes vendors just can’t keep up.

“So all of these are reasons I hear from people all the time as to why they want to talk to Formlabs, why they’re interested in 3D printing, why they think it’s something that’s compelling, and especially why they want to bring it in-house,” he said.

Advancements like Roboze’s Argo 1000 are also helping the medtech manufacturing industry embrace 3D printing in a way it never has before. During another Virtual Engineering Days presentation, Gerry Berberian, national sales manager for additive at Arburg, described how pellet-printing 3D technology can be used in medtech manufacturing. And to give some real-world examples, Balaji Prabhu, director of strategic marketing for medical device solutions at Evonik, joined in to talk about his company’s resorbable polymers and how they are being used with this technology to create customizable medical implants.

“It is unique because it has the ability to run any granular material through the system once it’s been tuned for it,” he said. “Actually up to three different thermoplastic materials can be run at once on our Freeformer 300 system.”

The process works by loading the material into the hoppers on the top right, Berberian said. “From there, it flows down into a screw and barrel. The screw and barrel plasticizes the material as it pushes it forward. Lastly, a constant stream of material is pushed into our nozzle and extruded as a string of microdroplets,” he said.

The processing method, and Arburg’s custom printing software, give the user full control of the system, and users can choose to print in varying densities from fully dense, similar to a molded part, to a low density, creating a lightweight part, Berberian commented. He noted that by using standard pellets that can be sourced on the open market, the cost of printing a part with an APF technology is only a fraction of that of a typical 3D printed part.

Prabhu turned the conversation to Evonik’s resorbable biomaterials and using 3D printing in medtech manufacturing for implants. He showed a video that highlighted the company’s polymer materials, describing them as lightweight. They can increase bone formation, and they can be completely absorbed by the body, reducing the need for removal surgery, according to the video. Evonik’s experts are also developing different materials such as powders and filaments for various 3D printing technologies to create patient-specific implants that can be 3D printed, within a matter of hours.

Resomer, which is Evonik’s resorbable polymer, has already been used in the field of sports medicine for knee repair. “But what’s interesting is this upcoming field using 3D printing,” Prabhu said. “For example, tracheal implants for pediatric surgery to open air passageways of infants. One cannot expect to have a metal implant going in there, which needs to be removed as the kid grows,” he explained. “Using a resorbable material is the perfect solution, which degrades away as the infant grows.”

Resomer is available in many forms, Prabhu said.

“Typically a surgeon or a medical device customer or company will decide if it [will be used] for one year or more than four years,” he said.

For example, polydioxanone is typically used in sutures because it degrades more quickly.

“So when you have a surgery, typically you have a suture and then these sutures degrade away in a few months of time. We’ve also recently introduced polymers that degrade in less than a few weeks of time,” Prabhu said, noting that wound care would be an ideal application for these materials.

He said that for APF printing, Evonik uses granules that are dissolved into gels, or inks using a bioplotter technology used for tissue engineering.

“We also have a Resomer filament that looks more like a spaghetti that is extruded into the final medical device using fused filament fabrication technology. Finally, [we have] a micron-sized powder that is used to lay a 3D print using selective laser sintering,” Prabhu said, noting that all these technologies are available for human use with the resorbable material.

Prabhu also said the cost of printing a part with Arburg Plastic Freeform technology is only a fraction of that of a typical 3D printed part, shared a Virtual Engineering Days speaker.