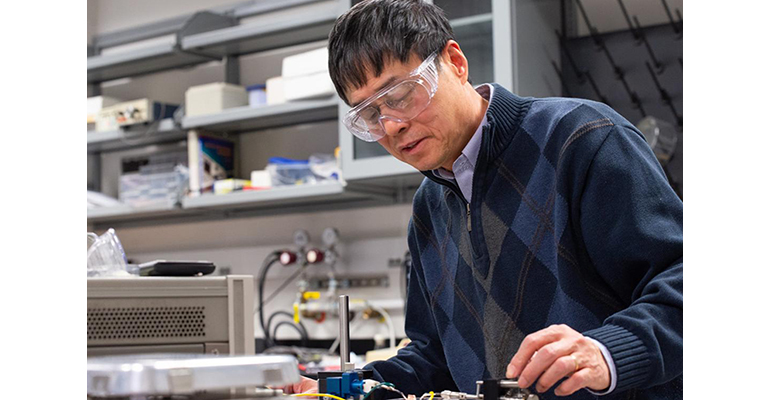 Doping in sports — if it’s discovered — doesn’t end well for the athletes. But for researchers at Penn State, meticulous doping of a polymer had a welcome outcome in terms of piezoelectric effectiveness.

Professor of electrical engineering Qiming Zhang and his team introduced chemical impurities into a polymer, a process known as doping in the materials science world. This allowed them to tune the material’s properties. The challenge is getting the percentage just right: Adding too little dopant would not produce the desired effect, while adding too much could hamper the material’s function. The researchers nailed it, however, creating a polymer that efficiently generated 60% more electricity than previous iterations. The research was published today in Science.

Piezoelectric materials convert mechanical stress into electricity, or vice versa, and can be useful in sensors, actuators, and many other applications. Stiff ceramics are often the material of choice. Implementing a piezoelectric effect in polymers can be difficult, but it’s worth the effort because polymers bring flexibility to the equation.

“Historically, the electromechanic coupling of polymers has been very low,” Zhang said. “We set out to improve this because the relative softness of polymers makes them excellent candidates for soft sensors and actuators in a variety of areas, including biosensing, sonar, artificial muscles, and more,” he explained in an article on the Penn State website.

The doping distorts the spacing between positive and negative charges within the polymer’s structural components. The distortion segregates the opposite charges, allowing the components to accumulate an external electric charge more efficiently. This accumulation enhances electricity transfer in the polymer when it is deformed, Zhang told Penn State’s Gabrielle Stewart.

To enhance the doping effect and ensure alignment of the molecular chains, the researchers stretched the polymer. This alignment, according to Zhang, promotes more of an electromechanical response than from a polymer with randomly aligned chains.

“The efficiency of the polymer’s electricity generation was vastly increased,” Zhang said. “With this process, we achieved 70% efficiency — a vast improvement from 10% efficiency before.”

This robust electromechanical performance, which is more common in stiff ceramic materials, could enable a variety of applications for the flexible polymer. Because the polymer exhibits resistance to sound waves similar to that of water and human tissues, it could be applied for use in medical imaging, underwater hydrophones, or pressure sensors. Polymers also tend to be more lightweight and configurable than ceramics, so this polymer could provide opportunities to explore improvements in imaging, robotics, and more, Zhang said.

The US Office of Naval Research supported this work.