For the sustainably minded who save and recycle grocery bags and other qualified polyethylene films and packaging for at-store drop-off, the problem is at-home storage. Bags don’t compact well and you may end up with a bin of bags or a bags of bags in the garage.

Introducing Obaggo, the world’s first and only in-home plastic bag and packaging film recycling appliance that compacts that collection of loose bags into a neat and tidy disk claimed as “the optimal shape and size for recycling,” according to David New, Obaggo Founder and CEO.

He should know about that — according to New, his father Robert founded one of the first recycling centers in the US in the 1970s. Back then on Saturdays David helped sort clear, green, and brown glass. He also used a simple device to squeeze aluminum cans into a pancake.

“That’s when I first learned about densification,” he laughs.

David took notice that plastic bags and other types of flexible packaging are at once the fastest-growing type of packaging material due to their efficiency as well as the most difficult to recycle.

“For decades, plastic bags and packaging film have been a contaminant in the recycling system,” explains New. “The wind can blow bags out of curbside bins. When bags are sorted at recycling centers, their thin and flimsy nature tend to jam up the recycling machinery, causing shut-downs. The disk made from the Obaggo appliance are specifically designed to hold together through the materials recovery facility sorting process.”

For the technically minded, New informs us that the appliance can store about 20 to 27 bags before it’s full and the compacting button can be pressed.

“The device uses a small amount of heat and pressure to compress in a total 15-minute cycle,” New explains. “We like to say, ‘it uses less energy than making a piece of toast’”.

Specifically, the bundle of plastic bags is heated to just above the glass transition point of high-density polyethylene (HDPE) for about 7 minutes while compressing throughout the cycle, New discloses. “When it cools, you have a nice disk, compressed and shrink-wrapped, but not melted.”

A typical disk weighs 3 to 4 ounces.

According to New, the ideal disk would be made of HDPE and low-density PE (LDPE) materials. Along with standard grocery bags, this would include #2 and #4 recyclable bread wrappers, paper towel wraps, mulch bags, films, and related at-store qualified packaging. 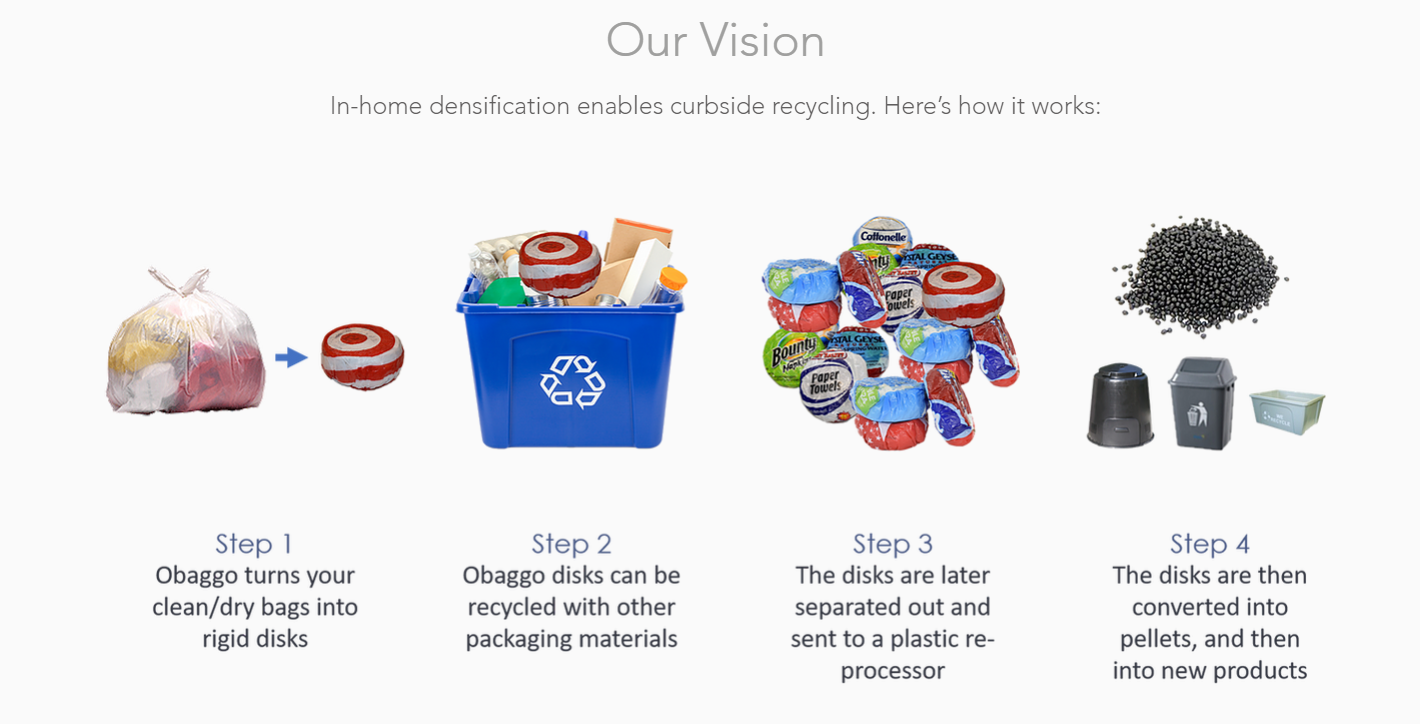 “There’s movement on the upstream side with making more flexible packaging recyclable, but nothing is happening on the downstream side because it’s not economical to collect film,” New says. “We’d like to bring the at-store drop-off model curbside and offer consumers a more convenient solution to collect bags when that happens.”

To better inform consumers about what films and packaging is recyclable with the appliance, New plans to develop a smartphone app that uses all the information available from the WRAP UK program. It will also instruct users where to recycle the disks.

“We can send email blasts to engaged consumers with notices such as ‘buy Bear Naked’s recyclable pouch’ or ‘don’t try to recycle Trader Joe’s nut bags because the multilayer films are not recyclable’,” New explains. “Eventually we will have a recyclable disk that’s as good or better than store-drop off materials.”

New, who is on the New York State Assn. of Recyclers single-use plastic’s committee, has made excellent connections in the recycling community over the years. Several municipal recovery (or recycling) facilties (MRFs) have indicated that they could accept Obaggo disks on Day One in their curbside programs, he reports.

New plans to verify disk quality as one of the goals for a pilot planned in MA. “Having that validation would add 30,000 drop-off locations,” New points out.

He believes that the Obaggo appliance can gain grassroots traction.

“Something has to change with plastic recycling,” states New, “and this might be the just the kind of thing needed.”

The appliance is at the crowdsourcing stage in pre-commercialization to fund the initial production run. However, Obaggo notes that, over the past five years, he has been through four business incubators and several design iterations, made more than 1,000 pucks from tens of thousands of pieces of plastic bags and packaging film, and have held numerous meetings with recycling industry professionals and consumers.

The appliance is available for pre-order through Indiegogo at a presale price of $249. Product shipments are expected by November 2022.