Plastic waste recycling is very much in the news, but its useful to recall that recycling in general is an age-old tradition. From hand me down clothes to preservative jars, it is a testament to both human practicality and ingenuity.

Previous to the current attention to plastic waste recycling, the practice was very much part of our culture during World War II. At that time our government impressed upon the population the need to recycle and reuse products like steel, tires, nylon to help the war effort. The enthusiasm for recycling plastic, like so many other conscious-raising phenomena, was not a major preoccupation until the 1960s.

Plastic waste recycling has grown rapidly in the years since. Few Americans are unaware of plastics recycling and local programs that can expedite the process. Similarly, shops and stores are now full of a variety of products like clothing, toys or furniture that have been fashioned from recycled plastics.

First plastic waste recycling plant was established in Conshohocken, Pennsylvania in 1972. Its success inspired further investment and recycling became a profitable business. In the following decades government involvement and environmentally-conscious communities created awareness about recycling and many manufacturers began to develop products with attributes that enabled reuse. 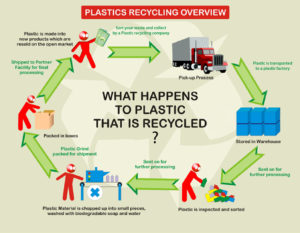 By the 1980s and the ensuing decades these efforts originated the use of HDPE and PET, which were developed with idea of plastic waste recycling in mind. Also, the adoption of a coding system helped consumers recognize which plastics were recyclable and which ones were not.

Plastic waste recycling in a more complicated process than, say, paper, metal or glass. More steps are involved and additional additives are usually required. In most instances, the parts are cleaned and sliced into smaller pieces and chunks. These, in turn, are melted down and turned into pellets. From here, these pellets are used to make new plastic products, sometimes in toto and sometimes in combination with virgin plastic resin.

While plastic waste recycling has grown considerably over the years, there is still much work to be done – both in the creation of virgin resin and in the recycling processes themselves. Fortunately, there seems to be a new breakthrough in the plastics industry on a daily basis and many experts are predict a near total elimination of plastic waste is on the horizon.