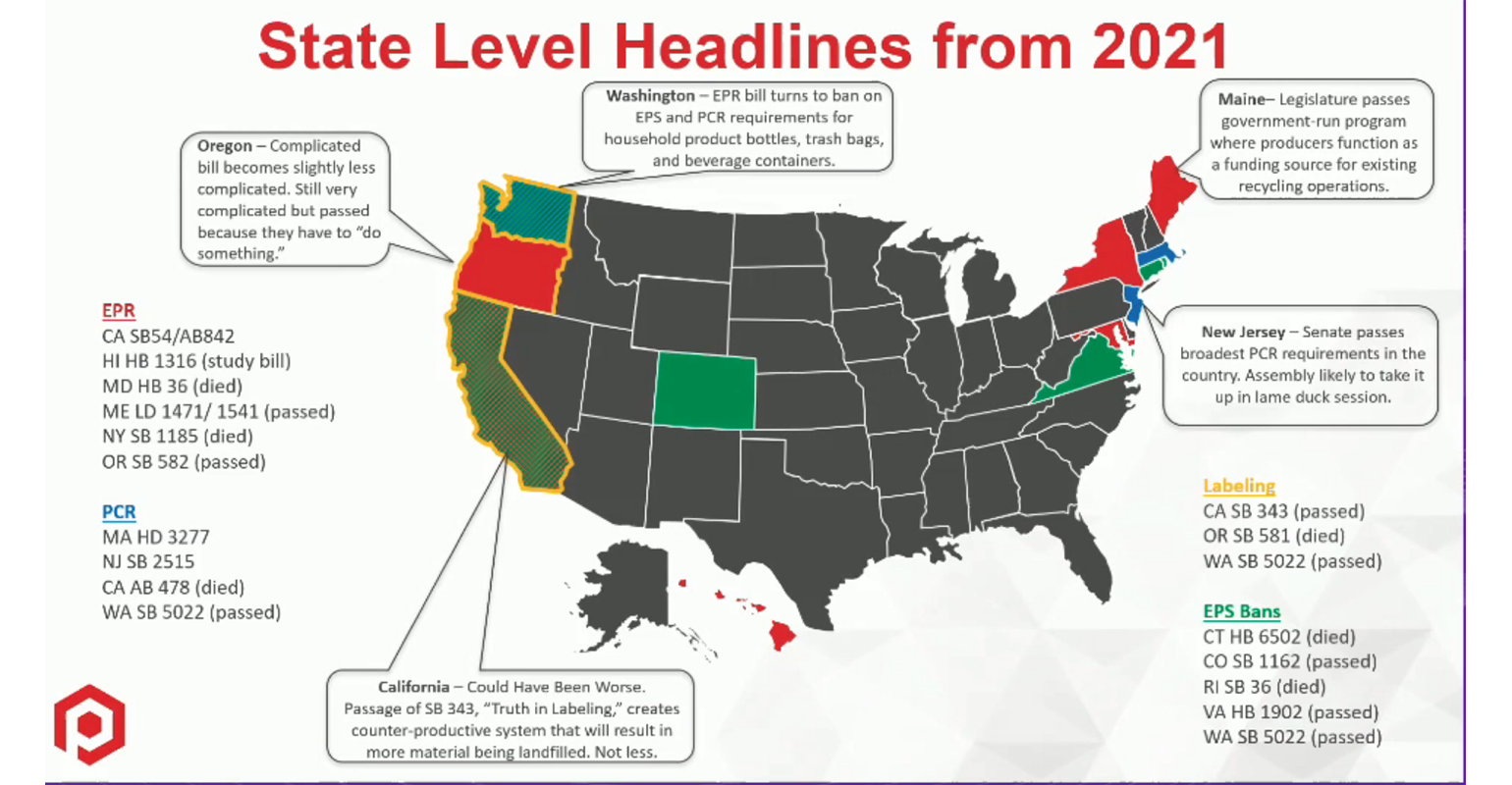 Shannon Crawford and John Grant of the Plastics Industry Association (PLASTICS) detailed those efforts Friday and forecast coming battles in 2022 in the closing session of the inaugural PLASTICS Packaging Summit, a three-day virtual event held on Nov. 3 to 5.

Of particular note on the federal level is a tax — up to 20 cents per pound — on virgin resin proposed Aug. 5 by Sen. Sheldon Whitehouse (D-R.I.), said Grant, Director of Government Affairs for PLASTICS. The REDUCE Act of 2021 would also impose a tax on the weight of virgin resin in finished single-use products and packaging that are imported. A companion bill has been introduced in the House.

“Senator Whitehouse’s stated goal is to force the plastics industry to use more recycled content,” Grant said. “Part of our education is that … the resin availability is not there yet, and this is not the right approach.” PLASTICS spearheaded a letter signed by 23 trade associations to “state our concerns with the bill.” The PLASTICS grass-roots letter writing campaign is active on its website under the “Advocacy” tab: Take Action for PLASTICS. A separate letter signed by 70 companies was also circulated among lawmakers.

Whitehouse pushes back on PLASTICS’ pushback

The need for such advocacy became more urgent, Grant explained, when the Senate Finance Committee included a list of options to pay for a $3.5 trillion federal spending plan (reduced to $1.75 trillion) being considered in the congressional reconciliation process in the coming weeks. “We’ve had an impact,” he asserted. However, while the tax is not listed among the “pay fors” for the reduced $1.75 trillion spending plan, “nothing in this town is dead until it’s dead. Senator Whitehouse has come to the floor of the Senate and made it clear that he did not like us pushing back on this.”

Concurrent with the resin tax proposal and other federal anti-plastic efforts are a number of similar measures on the state level. Chief among those efforts are extended producer responsibility (EPR) bills and labeling and recycled content requirements. For instance, EPR bills have moved ahead in Oregon and Maine, said Crawford, PLASTICS Director of State Government Affairs.

EPR measures have “the broadest impact” on rigid and flexible packaging, she noted. “While these bills are being … cast as EPR, they’re essentially just creating new or additional powers for state agencies to oversee recycling operations. They’re definitely very punitive for industry, and not a method we would recommend for improving the overall recycling landscape. While PLASTICS supports recycled content use, a lot of these bills are crafted with unachievable targets.”

California: Passage of SB 343 “Truth in Labeling” creates “counter-productive system that will result in more material being landfilled.”

Oregon: “Complicated bill becomes slightly less complicated. Still very complicated but passed because they have to ‘do something.’ “

Virginia the place to watch

In terms of the impact of this week’s elections on priorities for next year’s legislative sessions, Crawford noted that while New Jersey saw a slight shift in the balance of party power, Virginia is the place to watch.

“We were teed up to get very, very engaged in the commonwealth of Virginia, because there is an executive order there that was essentially banning all single-use plastics from being used at state agencies,” she said, including plastic water bottles and bags. With Republican Glenn Youngkin succeeding Ralph Northam, PLASTICS does not anticipate an executive order of that type progressing.

Ultimately, Grant urged, it is incumbent upon plastics industry professionals to continue to engage with PLASTICS and other industry associations and present a united front to guide lawmakers in taking realistic steps to address climate goals and consumer concerns.